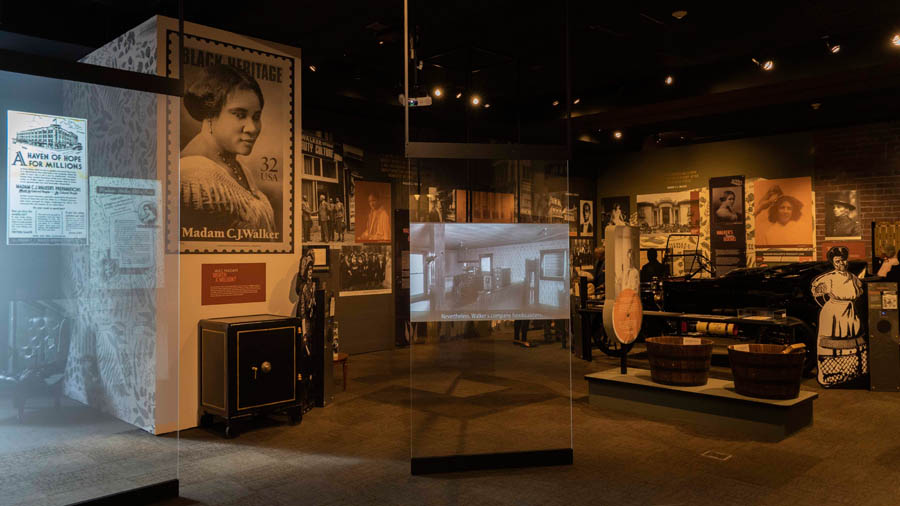 In the latest You Are There exhibit, drop in on Indianapolis icon and self-made millionaire Madam C.J. Walker at 640 N. West St. – the factory where she built her beauty product empire. Visitors can learn about Walker’s products, her method for hair growing, and the successes and struggles she and her company endured.

More than a businesswoman, Walker helped move the lives of many people forward in positive ways. Her contributions and legacy come alive in You Are There 1915: Madam C.J. Walker, Empowering Women through images and objects – many of which come from our collections – and multimedia pieces and activities.

Born Sarah Breedlove, she began her life on a plantation in Delta, Louisiana, in 1867, as the daughter of freed slaves. By the time she was a teenager, Breedlove was living in Vicksburg, Mississippi, where she toiled as a laundress, one of the few jobs African American women could hold. Following the death of her first husband, she and her young daughter moved to St. Louis. As a young widow, she struggled financially and eventually started selling products door-to-door for Annie Turnbo Malone – the start of her career in haircare and “beauty culture.”

In 1905, she moved to Denver, married Charles Joseph Walker, changed her name and launched a business selling her “Wonderful Hair Grower.” Success came quickly, and after traveling the country selling her product, Walker settled in Pittsburgh, where she established a college to teach others her beauty method.

By 1910, Walker was on the move again – this time arriving in Indianapolis to establish and incorporate her company’s national headquarters. She purchased her home on West Street and built a factory and distribution center on the site. Walker started beauty colleges around the country that provided women with education in haircare and beauty treatments and gave them the tools to open their own salons.

Walker left Indianapolis for New York City in 1916, where she died of issues related to hypertension three years later.

Madam Walker’s business provided access for generations of women to, in her words, “abandon the wash-tub for more pleasant and profitable occupation.” Even after she moved to New York, Indianapolis remained the hub of the Madam C.J. Walker Manufacturing Company.

At the time of her death, her company employed several thousand agents and had brought in sales of more than half a million dollars. Her daughter, A’Lelia, and other long-time employees continued the company after her death, and it was later passed down through Walker’s female descendants. The Madam Walker Legacy Center – built in 1927 as the Walker Theatre – stands as a tribute to her in downtown Indianapolis.

Madam Walker felt it was her duty to contribute all she could to the black community. She notably gave a large donation – $1,000 – to help build the Senate Avenue YMCA in Indianapolis in 1912. She encouraged her agents to give back to their communities as well.

As her business flourished in Indianapolis and across the U.S., Walker turned her attention to political matters. She became more involved in the National Negro Business League and the National Association for the Advancement of Colored People, giving speeches at some of their national gatherings.