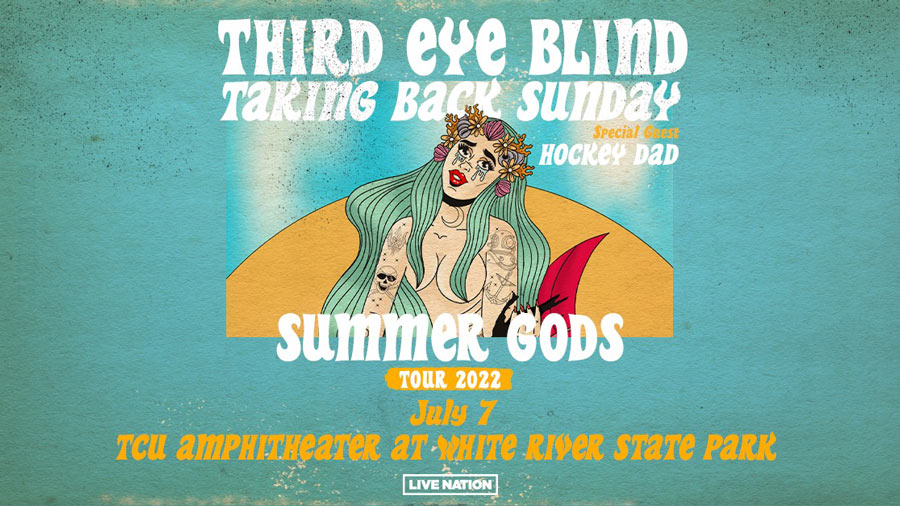 Third Eye Blind is proud to announce their tour Summer Gods: 25 Years in the Blind, with Taking Back Sunday and Hockey Dad.

"Twenty-five years of Third Eye Blind finds us feeling glorious as if everything is coming into deeper focus,” says Stephan Jenkins. “It's not lost on us that this is a miracle, and that we are in it because of the new fans that keep discovering us and the people who, over the years, have made our music part of their culture.”

“In the early days of Taking Back Sunday, Adam and I used to drive around in his old Honda listening to Third Eye Blind's second album, Blue; windows down, smoking cigarettes and singing along,” says John Nolan. “If someone had told us back then that one day we'd tour together, it would've blown our minds. We're so excited to be out with Third Eye Blind this summer, singing our songs and singing along with theirs.”

The upcoming Summer Gods tour will be supporting the restoration of a portion of the Palos Verdes Kelp Forest. Called the Blind Reef, proceeds of each ticket will help our friends in the surf community at SeaTrees to restore the kelp ecosystem that sequesters carbon off the California Coast.

In some parts of the state, more than 90% of kelp forests have disappeared in the last 10 years, caused by the proliferation of invasive purple sea urchins that humans are unable to consume. Clearing "urchin barrens" allows rapidly growing kelp to regrow and re-establish into a healthy kelp forest, creating habitat for marine life and sequestering carbon emissions. The latest science shows that globally, kelp forests can sequester more carbon than mangrove forests - restoring these sequoias of the sea is critical to solving climate change as 93% of all carbon in the carbon cycle is stored in our oceans (meaning just 7% is stored across our atmosphere and land biosphere.

This initiative is part of Third Eye Blind’s commitment to making the music touring climate more sustainable, a longstanding passion of the band’s frontman, Stephan Jenkins. Jenkins is an avid surfer and studied marine biology in college, working to restore kelp reefs at the age of 18. In addition to a portion of ticket sales supporting this cause, fans will also have the option to “buy” their own square foot of the Blind Reef amongst other offerings such as beach clean ups, limited edition merchandise, and meet and greets for donations that will bring us towards the completion of the Blind Reef.

The stage design is inspired by Stephan's visit to the 2021 Venice Architecture Biennale, where the Consortium installation, with its soaring steel and tree branches, evoked something aspirational and analog that is the vital core of Third Eye Blind's music.

“The Summer Gods tour always means to us outdoors in warm nights, music and collective joy. In that spirit, it is a treat to make it a whole day of music. We have been wanting to tour with Taking Back Sunday for several years now and Hockey Dad is essential listening on all of our playlists. It's serendipitous that they will be able to join on the Third Eye Blind’s 25th anniversary. Twenty-five years prompts us to take stock of ourselves, so everyone should expect a comprehensive set list with all of the songs that meant the most to our fans from the last 25 years as well as songs that are inspiring us now,” says Jenkins.

To celebrate, the band has collaborated with Smith & Cult to create a line of nail polishes in honor of their 25th Anniversary and named after songs on their 6 times platinum debut. The colors are named: Jumper, London, God Of Wine, Semi-Charmed and The Background. They are donating 100% of the proceeds from the shade Jumper to True Colors United, the non-profit founded by Cyndi Lauper that implements innovative solutions to youth homelessness that focus on the unique experiences of LGBTQ youth.

Smith & Cult is a beauty brand that is the antidote to beauty sameness. Designed for humans who would rather be themselves than be perfect, who know how to have fun along the way. We create clean, cruelty-free beauty products to match every mood. Our iconic nail lacquer has an exclusive 8-Free formula that lets you go easy on the planet, hard on the nail art.