The Reclamation of Madison Hemings 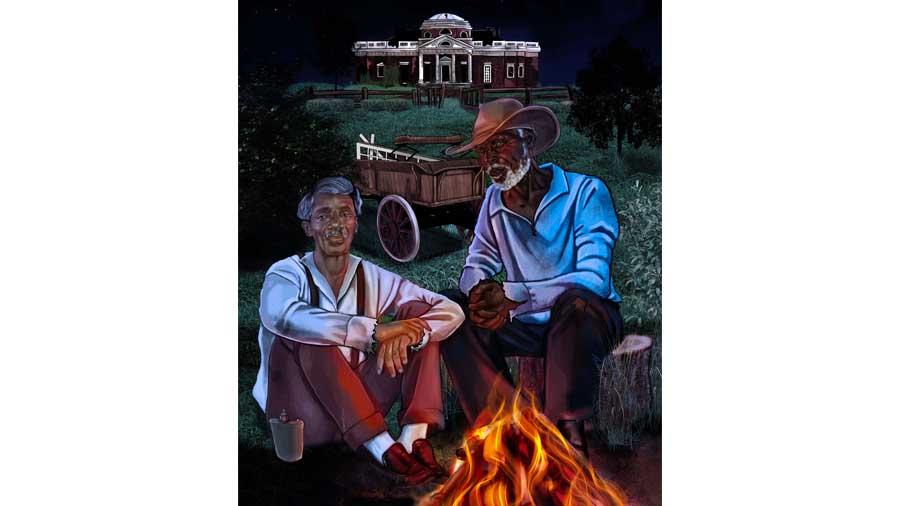 the ties that bind

This spring, the Indiana Repertory Theatre will share with audiences the world premiere of The Reclamation of Madison Hemings written by Charles Smith. A story steeped in the struggle of historical representation, the play gives voice to untold narratives hidden by the racial power dynamics of slavery.

The Reclamation of Madison Hemings takes place shortly after the Civil War has ended and follows Madison Hemings, the son of enslaved woman Sally Hemings and Thomas Jefferson, as he returns to Monticello with formerly enslaved footman, Israel Jefferson. Now in ruins, Monticello brings up the haunting, complicated, and conflicting perspectives and memories from the two men: one struggling with anger and resentment toward his biological father and mother, and one whose memories lean more toward the recollection of the warmth and belonging of family, even in the time of bondage.

“We chose this play because of our strong relationship with Charles Smith and because the subject matter is particularly compelling, revealing a historic moment that is rarely dramatized,” said Janet Allen, IRT’s Margot Lacy Eccles Artistic Director. It causes us to reflect, not only on the new insights themselves, but also on the fact that history is too often only seen through the experiences of those with the most power.”

The influence of the past, the need to tell stories from different perspectives, and the drive to honor our ancestors helped inspire Charles Smith to write this compelling play in which he works to shed light on individuals who have largely disappeared from history–in this case the history of Monticello.

“After visiting the Vietnam Veterans Memorial in Washington D.C., the National Memorial for Peace and Justice in Montgomery, Alabama, and the Whitney Plantation (museum) in Louisiana, I became fascinated by how the mere listing of names had the power to paint a vivid picture of the past, while keeping the past present and vital,” said Smith. “For several years, I wondered if there was a theatrical equivalent to what these memorials were doing. When I started researching The Reclamation of Madison Hemings and came across the names of hundreds of enslaved people who lived and died at Monticello, I realized that this was my chance to find out.”

Directed by Ron OJ Parson, this gripping world premiere about the past, identity, and hard truths will star long-time IRT actor David Alan Anderson as Israel Jefferson and Brian Anthony Wilson as Madison Hemings. There will be multiple post-show discussions throughout the run to help enhance the reflection and conversation about this important piece of theatre and the supporting history.

“It’s a play that deserves to be seen by everyone—particularly people who care about how the past affects us all, how families define us, how legacy matters. We hope it will bring a lot of people to the Theatre for a deep, emotional experience and the opportunity to not only talk about this play to family and friends but also participate in our community conversations,” said Allen.