These days, you can find sloths on pillows, on phone cases, as necklaces and as planters. They’re just about everywhere – and that includes the Indianapolis Zoo. The adorable-from-any-angle animals will live in MISTery Park, which will be located across from the Simon Skjodt International Orangutan Center. 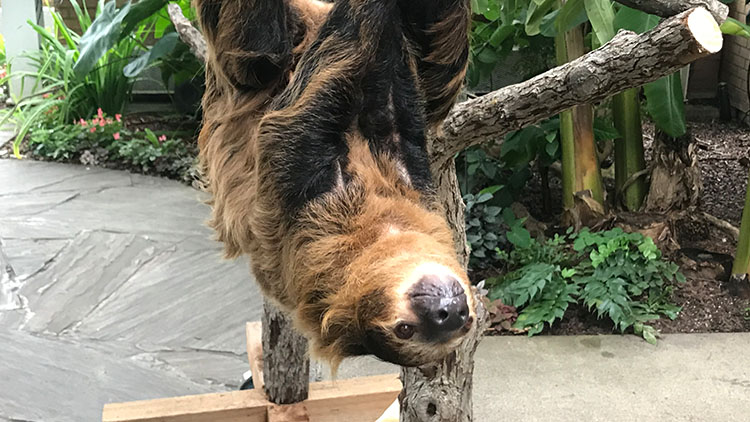 The new park opens May 25 and will feature a foggy, cool mosaic of colorful flowers, mosses, trees and plants. There will be misters along the pathway, and sounds recorded from a South American rainforest. The immersive experience all leads up to what are some of the cutest – and slowest – animals in the world. Better yet, there are no barriers to separate you from these two-toed creatures. No fences, no walls. Just an opportunity to hang out and grab a selfie.

If sloths aren’t your thing, slither over to the Deserts Dome. The newly designed habitats will bring you closer to some “extreme” snakes, including the infamous black mamba. It is one of the world’s most venomous snakes (second only to the king cobra). Native to sub-Saharan Africa, this 10-foot assassin was named for its inky-colored mouth.

Joining the black mamba are several other snake species, including the reticulated and Burmese pythons. The exhibit also will include venomous snakes from right here in Indiana. The new snake exhibit opens May 25 in the Deserts Dome, located between the St. Vincent Dolphin Pavilion and the Simon Skjodt International Orangutan Center.

If you’re planning a Memorial Day weekend trip to the Indianapolis Zoo, snag tickets now, as advance tickets always cost less. The Zoo’s calendar also has a handy-dandy projected attendance meter, which helps gauge the crowds and the entrance fee. (Less crowded means a lower-priced ticket, while more crowded means a higher-priced ticket.) Adult tickets are $15-$23, youth tickets are $12-$16, and children aged two and under are free.