Presenting the Winners of the 31st Annual ROSE Awards

For each of the last thirty-one years, we have come together to honor those who make our city the welcoming place we know and love. The Indy hospitality industry employs tens of thousands of people who do work that can go largely unnoticed despite its importance. These industry professionals define the meaning of true hospitality.

The 31st Annual ROSE Awards, which stands for Recognition of Service Excellence, allows us to honor 81 of the thousands of people that make up our hospitality workforce. Nine individuals were selected to take home the award for demonstrating exceptional service, and together they have 185 years of hospitality experience. Below you’ll find their inspiring stories.

William Hazen comes from a long line of people who dedicated their careers to getting people from point A to point B. His great grandfather served as a line superintendent for Santa Fe Railway, his grandfather as a driver for Triangle Transit, and his father as a driver for Fort Worth Transit. This family lineage has given him a deep interest in transportation industry, and he has even covered the walls of his house with unique transit memorabilia. On social media, you will find William sharing his collection of more than four thousand historical transit photographs with his dedicated following.

As much as William likes transportation history, he likes people and his passengers even more. After seeing a tragic accident where a passenger was killed while riding a bike, William knew something had to be done. With his own money, he decided to purchase bike lights for passengers who ride his bus and don’t have one. He now keeps at least two of these lights on his bus at a time to give out, as he knows some passenger may not be able to afford them. He recently donated $2,000 to Bike Lane Uprising, which led to the purchase of two hundred bike lights that were distributed through Bike Indianapolis.  William has been a Coach Operator for IndyGo the past two years and has been in the service industry for the past five.

Compassion is something that comes as second nature to Kay Hinds. Kay’s ability to connect with and remember the slightest details about someone that she just met impresses her CEO at Eiteljorg Museum. Kay’s kind heart was never more apparent than when she was there to console an artist that was traveling for the first time since losing his wife. The artist was regular at an annual Eiteljorg event, and his wife always joined him at the event. Kay persuaded the museum to honor the artist’s late wide during an awards ceremony and worked to gather photos of the couple. Kay gave remarks in a speech during that same ceremony that didn’t leave a dry eye in the audience.

While Kay isn’t working to make Indy the best it can be for our guests, she is and was a caregiver for her elderly mother and two elderly aunts. Unfortunately, she lost one aunt in 2019 and the other in 2020. Despite the personal struggles and time commitments that go with being a caregiver, you will never hear her complain and balances it all without an issue. Kay has worked in the hospitality industry for 40 years and at Eiteljorg Museum for the last 20.

In a time when we all needed hope, Juvenal Valdez gave that daily to his co-workers, guests, and family. He saw extreme lows, where he watched his friends lose their jobs, his hotel suffer damages during social unrest, and supply chain issues impact the day-to-day operations of his job. Despite all of this, Juvenal never lost his optimism. He worked creatively to re-work menu items to not magnify supply chain and labor issues. He innovated new ways to dine so customers would feel safe when there was so much uncertainty. At a trying time financially for the industry, Juvenal’s work landed 500 thousand dollars in food revenue in 2020 and nearly a million dollars in revenue in 2021. All of this ... despite the fact he was the only banquet cook left. Juvenal moved his family from Mexico to Indy over two decades ago. He became involved with the community, found a home, and never left. He has served as the Banquet Cook for Hilton Indianapolis Hotel & Suites Downtown for the past 21 years.

Caity Withers’ dedication to our city comes out each and every day. Caity helps create public spaces that reflect who we are as a community. She is always cheerleading for spotlighting more diverse voices and representation through the arts at Indianapolis International Airport. She spearheaded the creation of the Kind Gallery and curated displays of art from underrepresented groups. Caity leaves every place she goes better than she found it. She has a personal commitment to ensuring that people feel valued and goes out of her way to create inclusive environments.

Caity never backs away from even the tallest of tasks. When the airport had six inaugural flights across three different airlines in the span of two days, she was up to the challenge and planned and organized each of these events. Outside of the airport, Caity makes an impact as a volunteer for several community-based organizations, including serving as a Special Needs Buddy for the past ten years. She has served as the Arts Program and Marketing Specialist for Indianapolis Airport Authority for the past three years.

Hero. That is the term that comes to mind when thinking of Keith Crawford. Not only does Keith’s work keep this community running by keeping the gas, water, and lights on, he recently saved lives just earlier this year. Keith was dispatched to a duplex home on a gas leak investigation. When he arrived, he found the leak and shut off the gas immediately. Simultaneously, Keith was alarmed to hear a man on the other side of the duplex screaming as he ran out of the house on fire. Quickly, Keith took off his jacket and smothered the flames on the individual. He then escorted the rest of the duplex residents away from the scene as their homes went up in flames. Throughout the entire experience, Keith was calm and compassionate, reassuring the injured man who caught on fire and the families who had just lost their homes. He did all of this while also assisting the fire and emergency personnel. Truly one of Indy’s heroes. Keith has served as a Utility Service Specialist for Citizens Energy Group for the past eight years.

Keenan Wilson might be known for his TikTok dances, but his work as a Night Auditor for Fairfield Inn and Suites Fishers is what got him the ROSE award. Keenan is the ultimate people person. He knows everyone on the hotel’s staff and wants to know every guest that walks through the doors. He anticipates a guest's needs before they ask, surprises kids with a treat from the snack bar, and gives off a welcoming presence that comforts everyone he meets. When a grieving mother was arranging funeral plans for her son, Keenan was able to offer late night moments of reflection and optimism.

He says to live each day as if it were your last, and he packs as much into each hour of his day as he can. He makes the commute from his Greenwood home to the Fishers hotel without any complaints. When a coworker was struggling with the 11 pm to 7 am shift, he offered to trade shifts because he felt it was a way he could help her out. Keenan has a heart to serve and has the goal of working his way into a management position.

For 45 years, Denise Cummings has made a 10-foot by 10-foot windowless square a fun and welcoming place to be. On her elevator in the City-County Building, all the riders are treated like VIPs. She has served five Indianapolis Mayors from Richard Lugar to Joe Hogsett, and has been a friend, guide, and confidant to each of them.

For 38 of those years, she would be in the elevator from 7 am to 3 pm each day before heading to her second job as a housekeeper, where she would work until 10 pm. She is the backbone of the City-County Building and has even taught the mayor some dance moves over the years. She always has the well-being of others on her mind, even giving the mayor additional duties like notifying city employees that they can head home early ahead of holidays.

From the day Mikado Restaurant first opened its doors to the time it closed them for the final time, Agnes Tsang was there to welcome and serve thousands of customers. Mikado was located in the heart of Indy’s convention center campus and brought diverse culinary offerings to Indy’s visitors. Agnes’ great work was not unnoticed by all those customers as one social post says, “this server is the best server in Indianapolis. I think I’m in love and my girlfriend knows it.”

Every February, Senior NFL reporter Adam Schefter would come to Indy and head to Mikado just to see Agnes, the young woman who would always welcome him with open arms – and sometimes – even kisses. When Adam returned this year and saw that Mikado was closed, he went to Twitter and shared his dismay and story of how great Agnes is with his 9.4 million followers. Agnes now works at Harmony Steakhouse in Whitestown, Indiana.

Jeanne Moore always keeps her guests close to her heart. With her hotel, the Residence Inn on the Canal being so close to local hospitals, there are often emotionally strained guests who come through the doors. Jeanne always wants to make their stay as comfortable as possible, even using her own money to buy cards, flowers, and trinkets for guests who may need a pick-me-up. She is a firm believer in the power of prayer and keeps the struggling families on her prayer list. Just recently, a man was transferred to a nearby hospital after a tragic accident. Jeanne became a welcoming and familiar face for his family when they would return to their hotel after long emotional days at the hospital. When she learned of the man’s death, she made sure to pay her respects to the man’s wife and family.

Jeanne also protects her guests. When she met a guest who was traveling to buy a puppy for her two daughters, Jeanne noticed some red flags that made her wonder if the guest was being scammed. After talking with this guest more, they determined that they should contact the police. Together, they determined that the guest was indeed being scammed and stopped her from completing her trip. Jeanne’s ROSE Award nomination was unique as it did not come from her place of employment but from the Indianapolis Metropolitan Police Department.

Congratulations to all honorees for their recognition of service excellence! 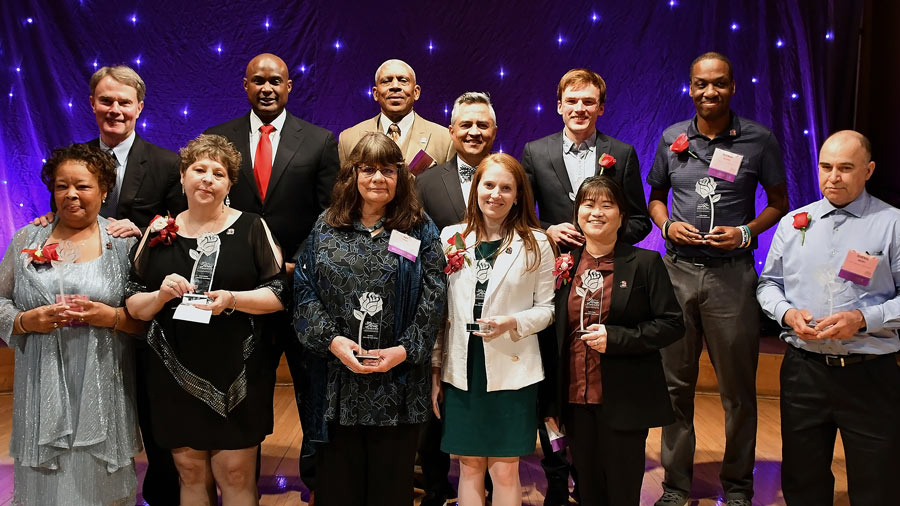 BY: SAM REEL
Sam Reel is a senior at Butler University studying sports media and is the current Communication Intern with Visit Indy. Sam loves exploring the city and discovering everything that makes Indy an incredible place to be. When the weather is nice, you can find him walking the canal, enjoying a meal outside, or watching the Indians at Victory Field.
Featured Sponsor