One Nation Under a Groove Tour - George Clinton & Parliament Funkadelic 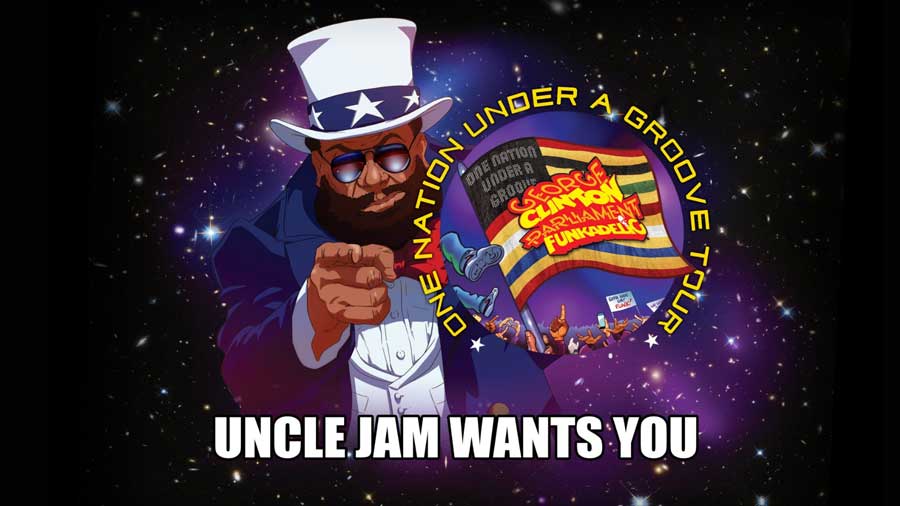 George Clinton & Parliament Funkadelic is back with the One Nation Under a Groove Tour, with iconic front-man George Clinton still at the helm, and this time, he’s bringing his friends. New luminaries of the funk & jam world will support the tour, with acts being announced soon!

With a career spanning 50 years of pioneering music, breaking down cultural barriers, and blurring the lines between genres to the delight of his ever-growing fanbase, George Clinton continues his unstoppable march forward into the future of music. As so many generations of fans have come to realize, the Godfather of Funk is so much more than the artist who ‘blew the roof off the sucka’ with his blockbuster “Mothership tour” in the 1970’s – an event that still looms large in the minds of fans from that era. He is so much more than the man who discovered Bootsy Collins, produced a young bunch of dudes called The Red Hot Chilli Peppers before they were a thing, even more than just the man who’s music gave birth to so much of hip hop culture by way of his influence on Ice Cube, Snoop, Dr. Dre, and countless others who sampled his music over the years. Taken alone, any one of these would be a monumental accomplishment for most artists. But George was never satisfied with what happened yesterday, and 2015 saw George Clinton win a Grammy (finally) with Kendrick Lamar for the album “To Pimp a Butterfly.

“George Clinton has singlehandedly done more to push music forward than any other artist I can recall. This tour represents that ‘big tent’ he’s created that includes so many generations.” says Nick Szatmari of Universal Attractions Agency, who has represented George & P-Funk for the last 15 years and helped co-create the One Nation Under a Groove Tour with his partner Jeff Epstein at UAA. Epstein adds “George has influenced artists across so many cultures, generations, genres. Our musical lives would not be the same if we never had George Clinton, and this is a once in a lifetime chance to come together and witness first-hand the next chapter of his iconic career being written before our eyes.”