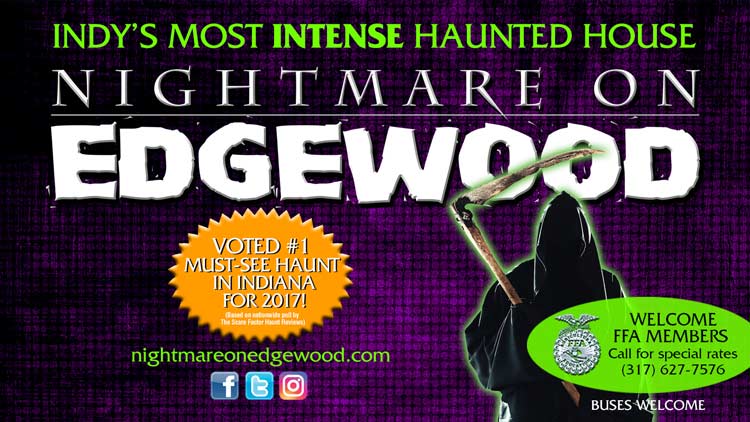 Nightmare on Edgewood opens for its 43rd season. With even bigger scares and spooky excitement in store this season, two of Central Indiana’s most recognized names in haunted entertainment are becoming one – House of Trepidation, which opened in 2015, will now operate within the halls of Indy’s longest running and most intense haunted house, Nightmare on Edgewood. To accommodate the merge and to elevate the guest experience, the upgraded haunted house is moving next door to a newer building with higher ceilings.

One ticket to Nightmare on Edgewood grants admission to three separate haunted attractions. At Edgewood Sanitarium, help the patients escape the deranged doctors and their inhumane medical experiments. Outsmart murderous psychopaths waiting inside the state-condemned House of Trepidation. Try to blend in as you navigate the dilapidated barnyard and stable at Conley Farm - wouldn’t want the workers to mistake you for a runaway hog! Experience Lights Out the final weekend – Friday, Nov. 5 and Saturday, Nov. 6 – and use a glow stick to navigate all haunted attractions in the total darkness, featuring old school villains!