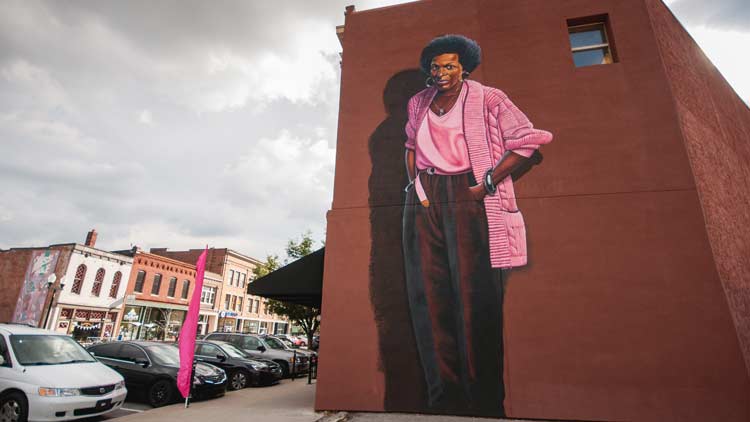 Several cultural and community partners worked together to complete a mural honoring Indianapolis-based poet and artist, Mari Evans — one of the founders of the Black Arts Movement. Evans selected artist Michael Jordan, aka ALKEMI, to paint the large, photo-realistic portrait. The project is funded by a grant from The Indiana Arts Commission as part of the Indiana Bicentennial Celebration and with support of The Efroymson Family Fund and in partnership with Riley Area Development. Born in 1919 in Toledo, Ohio, Evans called Indianapolis home from 1947 until her death March 10, 2017.

An influential member of the 1960s Black Arts movement, which included Amiri Baraka, Gwendolyn Brooks, Nikki Giovanni and Etheridge Knight, Mari published in 1969 her first work Where Is All the Music?, followed by her more famous I Am a Black Woman (1970). During this time Evans also worked as a producer, writer, and director of The Black Experience (1968-1973) – a history documentary that aired on prime time in Indianapolis. She also worked in theatre, adapting the musical “Eyes” (1979) from Zora Neale Hurston’s novel “Their Eyes Were Watching God” as well as writing a choreopoem, “River of My Song” and a one-woman theatre piece called “Boochie.”

Her books for children include “Dear Corinne, Tell Somebody! Love, Annie: A Book about Secrets” (1999), “Singing Black: Alternative Nursery Rhymes for Children” (1998, illustrated by Ramon Price).

The most important of her countless awards for writing came in 1981 when she received the National Endowment for the Arts Creative Writing Award.