Indy movie lovers now have another place to enjoy the art of film, right in the heart of Downtown Indianapolis.

“We’re ecstatic to bring the magic of movies and film to Indy at Bottleworks District,” said Steve Herring, CEO of Living Room Theaters. “Living Room Theaters has reinvented the way films are experienced and distributed by creating a less conventional and more unique experience – from the film selections to the re-imagined lobby ambiance, to the concessions, seating, services and more.”

Despite the pandemic, Living Room Theaters wanted to move forward with pre-COVID opening plans. "I think it's really important to plant a flag and say yes, we opened in 2020, even if it was the last weeks of the year," CEO Steve Herring said. "We're also very excited to be welcoming the public in."

With safety in mind, Living Room Theaters will initially operate five days a week, Wednesday through Sunday. COVID-19 safety protocols include opening with a smaller staff, limiting capacity in theaters with patrons seated apart, staggering show times, and diligently cleaning and disinfecting. Staff and patrons are required to wear masks indoors except while eating and drinking.

Occupying two floors and over 27,000 sq. feet of a new building, Living Room’s lobby features an art-deco design concept with wall-to-wall murals by local artists. Pamela Bliss designed a 56-foot-high King Kong mural that spans 48 feet across at the entrance to the theater and reaches around the grand staircase. A Metropolis-inspired mural designed by William Denton Ray wraps around two walls and incorporates shapes and elements representing local Indy landmarks and recognizable buildings with gold, grey, and red tones.

A large lobby area features loose seating that transitions into the lounge, where four custom-built banquettes with separated seating bookend the bar area. And a dazzling wall and ceiling lighting system offers an array of individually programmed lighting schemes. Sloped ceilings, which rake away from the screen, create the feel that the screen is pulling towards the seats.

For further information, be sure to visit the official Living Room Theaters website. 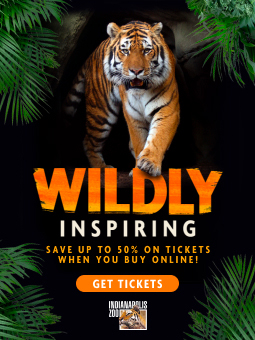