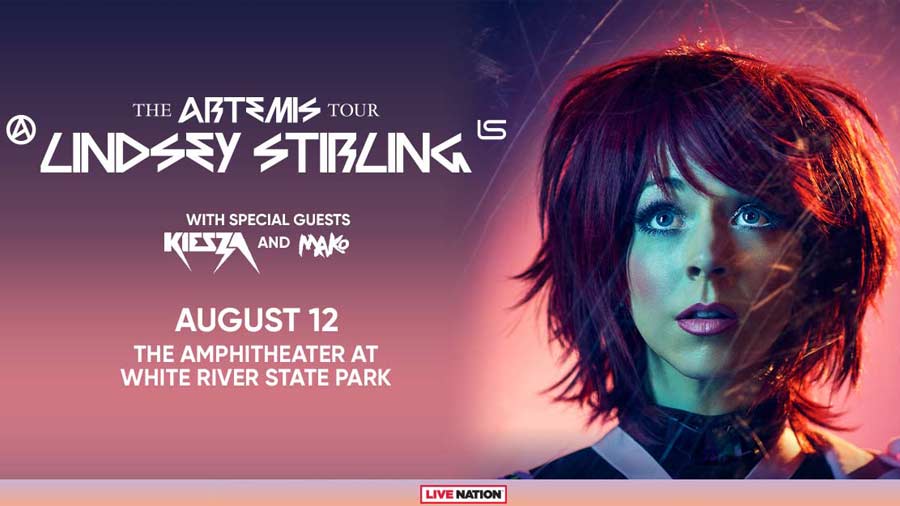 Award-winning violinist and dancer Lindsey Stirling will hit the road this summer in support of her ARTEMIS album.

“After taking the Artemis tour all over the world, I can't wait to FINALLY bring it home to the states,” Stirling said. “I never know how to describe my shows but they are theatrical, full of choreography, costumes, and a light show that would make a DJ feel quite at home. This Artemis tour is my biggest and boldest show yet and it’s a joy to perform. I hope you love it.”

Stirling’s fourth studio album, ARTEMIS, was released in fall of 2019 and made an appearance on the Billboard Top 200 chart as well as topping the Billboard Independent and Electronic Charts. Lindsey’s recent TV appearances include the Champions finale of America’s Got Talent and appearances on NBC’s The Kelly Clarkson Show and ABC’s Kelly and Ryan in addition to filming several new videos and working on her accompanying Artemis-inspired Comic book series.

Joining Lindsey on the road will be notable artists Kiesza and Mako.

Lindsey Stirling remains fearless enough to always dream big. Since the release of her 2012 self-titled debut, the electronic music impresario, violinist, dancer, and artist quietly and humbly became one of the 21st century’s most innovative stars by clinging to her groundbreaking vision of cinematic violin-driven electronic music. After bowing at #2 on the Billboard Top 200 and #1 on the Dance/Electronic Album Chart, holding #1 on the Classical Album Chart for 21 consecutive weeks, and receiving a Billboard Music Award for “Top Dance/Electronic Album,” her sophomore opus Shatter Me would not only garner an RIAA Gold certification, but it would rank as the #2 Dance/Electronic Album and #1 Classical Album on Billboard’s 2015 Year-End charts. Attracting over 12 million subscribers and 2.8 billion-plus views on YouTube, in 2015 Forbes placed Lindsey at #4 on its yearly YouTube artists list, making her the highest-ranked female. Her headline tours would play to a cumulative audience of over 800,000 people worldwide, and her literary debut The Only Pirate at the Party, co-written with her sister Brook S. Passey became a New York Times Bestseller. Lindsey’s third-studio album Brave Enough, debuted at #5 on Billboard’s Top 200 Album Chart, went on to score the #1 spot on Billboard’s year-end Top Dance/Electronic Album list and earned Stirling a 2017 Billboard Music Award for “Top Dance/Electronic Album”. In 2017 Lindsey released her first ever holiday album titled Warmer in the Winter featuring classic and original songs. This album was the #1 new Christmas album of 2017, ahead of pop music heavyweights such as Gwen Stefani and Sia. It was also the best-selling new holiday album and the best performing holiday album on Pandora with over 40 million spins. With such insistent demand coming from her fans, the Christmas Album marked another special release in 2018 with a few new songs as well as some Christmas classics. Lindsey’s musical talent and success on YouTube with over a Billion Views also launched a successful career into Television. Driven by a strong International Fan base, Lindsey was runner-up on Season 25 of ABC’s hit show “Dancing with the Stars” with her partner Mark Ballas and did a stint on NBC’s “America’s Got Talent” as well. She has continued to build an impressive fan base that stretched across all demographics forging her own path for future young Artists to emulate. Amongst her numerous achievements, Stirling co-headed the US tour with Evanescence which was named as one of Live Nation’s 10 best-selling amphitheater tours of the 2018 Summer in addition to winning several coveted Music Awards and numerous appearances on the top Billboard Charts. Lindsey Stirling embodies the true spirit of today’s independent recording artist whose symbiotic relationship with her fans has led to a Worldwide audience filled with positivity. By using her own story to show young adults that confidence in the very thing that makes you unique is the key to success, she continues to be a light in today’s Entertainment Scene and bring her own brand of ‘Magic’ to the many lives she has touched.