Halestorm with The Pretty Reckless, The Warning, and Lilith Czar 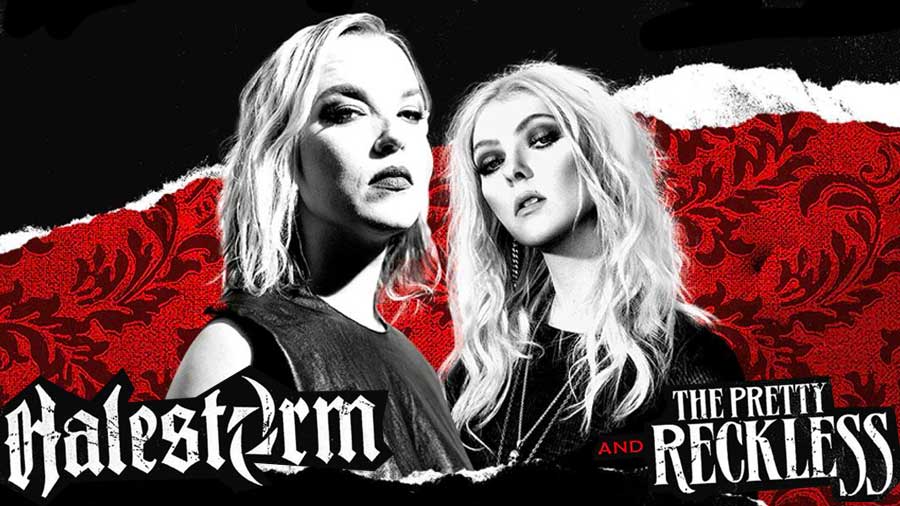 Halestorm, founded by siblings Lzzy and Arejay Hale in their teens, has grown into a chart-topping trailblazer in today’s rock music landscape. The band surpassed a billion streams cumulatively and has sold out shows around the globe, with the San Jose Mercury News declaring them “the best hard rock band in the world” after their November 2021 show. On May 6, the band will release their fifth full-length studio album, Back From The Dead. The title track, called “a biting but cathartic howler” by Rolling Stone, marked the band’s sixth #1 at rock radio, and the second single, “The Steeple,” is about to enter the top 10.

Halestorm has grown from a childhood dream of siblings Lzzy and Arejay Hale into one of the most celebrated rock bands of the last two decades, with their music surpassing a billion streams worldwide. They'll release their fifth studio album, Back From The Dead, on May 6, and the title track marked their sixth #1 at rock radio. Rolling Stone called Vicious, the band’s last album, a “muscular, adventurous, and especially relevant rock record." It earned the band their second Grammy nomination, for Best Hard Rock Performance for the song “Uncomfortable” and led Loudwire to name Halestorm “Rock Artist of the Decade” in 2019. Fronted by the incomparable Lzzy Hale with drummer Arejay Hale, guitarist Joe Hottinger, and bass player Josh Smith, Halestorm has earned a reputation as a powerful live music force, headlining sold-out shows and topping festival bills around the world, and sharing the stage with icons including Heaven & Hell, Alice Cooper, and Joan Jett.

The Pretty Reckless formed in New York City during 2008, and the musicians and late producer Kato Khandwala initially made waves with their 2010 debut Light Me Up. After countless gigs, the band returned with Going To Hell in 2014. Not only did the record crash the Top 5 of the Billboard Top 200, but it also ignited three #1 hits — the Platinum-certified "Heaven Knows" (the biggest rock song of 2014), "Fucked Up World," and "Follow Me Down" — a feat that had not been accomplished by a female-fronted group since The Pretenders in 1984. Meanwhile, their third offering, Who You Selling For, saw them return to #1 on the Mainstream Rock Songs Chart with "Take Me Down," which cemented them as "the first band to send its first four singles to #1 on the chart," according to Billboard. Praise followed from Vogue, Nylon, and more, as the quartet lit up television shows such as Letterman and Conan. With over half-a-billion streams, they headlined countless sold out shows and toured with Guns N' Roses, Soundgarden, and many other heavy hitters. Fourth album Death By Rock And Roll was released in February 2021 via Fearless Records. Upon release, the record topped multiple sales charts — including Billboard's Top Albums, Rock, Hard Music, and Digital Charts. The record also yielded several No. 1 singles — "Death By Rock And Roll," "And So It Went" (Feat. Tom Morello), and "Only Love Can Save Me Now" (Feat. Matt Cameron + Kim Thayil) all topped the charts. The Pretty Reckless are also the first female-fronted band to have back-to-back No. 1 singles at the active rock format. They are also the first female-fronted act to have seven No. 1 singles on the Billboard Rock Radio Chart, a feat achieved with "Only Love Can Save Me Now." The album was universally praised by PEOPLE, V, The TODAY Show, The Daily Beast, Hypebae, SPIN, Rolling Stone, Bustle, Women's Wear Daily, Loudwire, and more.

The Warning infuses rock music with a much-needed shot of adrenaline. The Monterrey, Mexico trio of sisters—Daniela “Dany” (guitar, lead vocals), Paulina “Pau” (drums, vocals, piano), and Alejandra “Ale” Villarreal (bass, piano, backing vocals)—charge forward with head-spinning riffs, unpredictable rhythms, stadium-size beats, and skyscraping vocals. Through a series of independent releases, The Warning garnered the respect of countless fans and musicians from across the globe before signing with LAVA/Republic Records to release their latest MAYDAY EP (2021). The band’s single “CHOKE” surged them to the forefront of hard rock and they amassed over 1.5 million social media followers and 85 million YouTube views. In 2021, the band was given the distinct honor to be featured on Metallica’s Blacklist album, covering “Enter Sandman” with multi-platinum pop superstar Alessia Cara. In January of 2022, Disturbed frontman, David Draiman publicly praised the band on his personal Twitter page stating that The Warning “gives him hope for the genre’s future,” and further described the hard-rock trio as, “Young powerful women playing real instruments and writing songs the entire rock genre can be proud of.” The three-piece powerhouse have already played alongside rock music legends such as The Killers, Alice Cooper, Vince Neil, Tesla, Def Leppard, and Foo Fighters, and will be heading out on their 2022 MAYDAY North American headline tour—kicking off in San Diego on April 18, hitting New York’s Gramercy Theatre on May 6, and two nights at the Troubadour in Los Angeles on May 23 and May 24. Their new single “MONEY” is set for release on March 25, 2022—a song that aims to spotlight the societal and humanitarian burdens directly caused by corruption, power, profit, and greed.

Lilith Czar arrives with the force of an otherworldly thunder, arising in visceral rebirth from an untimely grave of surrender and sacrifice. Her voice is the sound of supernatural determination, summoned with a confessional vulnerability and unapologetic authenticity. The girl who was Juliet Simms - her dreams discouraged and dismissed, her identity confined and controlled - is no more. In her place stands Lilith Czar, a new vessel forged in unbridled willpower and unashamed desire. Created from Filth and Dust, the debut album from Lilith Czar, is an evocative invitation into her bold new world. It's aggressive music with warm accessibility; huge hooks with driving hard rock—the new larger-than-life icon channels the fierce combativeness of Fiona Apple and Stevie Nicks' seductive witchery. Lilith Czar arms herself with sonic power, theatricality, and confidence. It's a sound where the pulse of Nine Inch Nails, Halestorm's songcraft, and the libertine spirit of David Bowie converge, all in service of a ritualistic ache for a more just and equitable world.