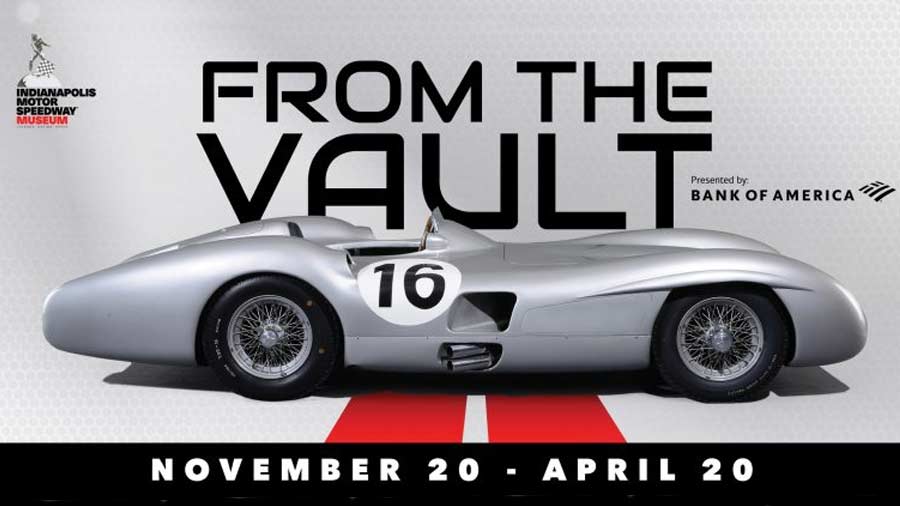 The treasured vehicles and artifacts that will be showcased in “From the Vault” presented by Bank of America are part of the IMS Museum’s permanent collection, including a selection of one-of-a-kind motorsports gems stored in the Museum’s basement. A sampling of rare “From the Vault” artifacts includes: *The exotic, streamlined 1954-55 Mercedes-Benz W196 Formula 1 car, and the 1964 Ferrari 250 LM – the last Ferrari to score an overall victory at the 24 Hours of Le Mans, in 1965. *A host of historically significant Indy cars and pre-Indy race cars, including a 1906 FIAT, the 1957 winner of the “Race of Two Worlds” at Monza, Janet Gutherie’s 1978 Wildcat Indy car, and the fastest car in Indianapolis 500 history: Arie Luyendyk’s 1996 track record-setting Reynard/Ford 94I. *Numerous pop culture artifacts and trophies, including items from the Rudolf Caracciola collection, representing the stunning artisanship of pre-World War II European Grand Prix racing trophies. The 1965 24 Hours of Le Mans overall winner: the IMS Museum’s 1964 Ferrari 250 LM. Due to space constraints, the IMS Museum can display only 20 percent of its collection at a given time, and according to IMS Museum Executive Director Betsy Smith, “From the Vault” represents not only an opportunity to see items often kept in storage, but a glimpse of what the IMS Museum could share on a regular basis provided a future fundraising campaign meets the requirements to renovate the current footprint and expand the Museum. “Having honored a few of the most notable names in motorsports history with recent exhibits – Penske, Foyt, Unser, Andretti – we’re excited to share with our fans and the general public a sampling of what the IMS Museum has in its collection, and I want to personally thank Bank of America for their support,” said Smith. “I think our Indianapolis 500 fans will be excited to see the array of open-wheel racing items in our collection, but as “From the Vault” will attest, the IMS Museum collection tells the story of global motorsports.” Pending the results of a future capital campaign, the museum could complete a full renovation and expansion within 5-7 years. With support from partners like Bank of America, the IMS Museum is launching several pilot educational programs, aimed at getting kids of all ages excited about the STEAM (science, technology, engineering, arts, math) aspects of racing. Larry Bisceglia’s 1951 Chevy van, of “First in Line” lore and a treasured part of the IMS Museum collection. “We’re extremely happy to expand our relationship with the Indianapolis Motor Speedway Museum by supporting ‘From the Vault,’” said Andy Crask, market president, Bank of America Indianapolis Market. “The IMS Museum has been part of Bank of America’s ‘Museums on Us’ program for over a year, and our goal in supporting ‘From the Vault’ is not only to provide educational value for the public, but to show the public what the IMS Museum can do as it plans for the future.” “From the Vault” presented by Bank of America will be open until April 20, 2020. From November 1-February 29, IMS Museum hours are 10 a.m.-4p.m. (ET) daily, except Thanksgiving and Christmas days, when the Museum is closed. From March 1-October 31 the Museum is open 9 a.m.-5 p.m. daily.