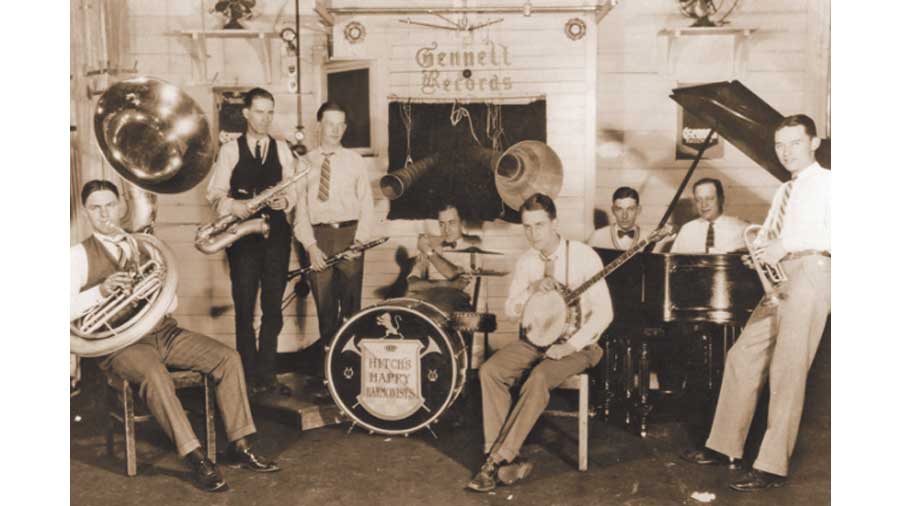 The musical recording business of the Starr Piano Company and its Gennett label was a relatively short-lived venture, lasting less than two decades. However, the ripple effects of the music created in this small Richmond, Indiana, studio had far-reaching effects. Jazz, blues, country, and gospel artists who recorded there helped define American music for generations and continue to influence modern music on a global scale. Gennett produced some of the earliest recordings of Louis Armstrong, King Oliver, Bix Beiderbecke and Hoagy Carmichael.

The history of this impressive business goes back to 1872, when James Starr convinced George Trayser to move his piano-manufacturing operation from Ripley, Ohio, to Richmond. In 1893 Henry Gennett and his father-in-law, John Lumsden, joined the business. A decade later Henry Gennett took over full control, following the death of Starr, Trayser, and Lumsden. He rapidly expanded operations and eventually passed on the business to his three sons Harry, Clarence, and Fred. Fred would lead the recording division of the company, and in 1921 build a recording studio on the grounds of the Starr piano factory in Richmond that had been manufacturing phonographs since 1916. By the late 1920s, the company was pressing records for more than 25 labels worldwide, including for the Sears Roebuck and Montgomery Ward catalogs. They even recorded and pressed records for the Ku Klux Klan during its 1920s heyday.

The company’s worldwide network of piano stores facilitated distribution of its phonographs and records helping the music catch on. Jazz enthusiasts consider Richmond and the Starr Piano Company’s Gennett Records studio “the cradle of recorded jazz.” Starr Gennett also nurtured other forms of popular music, ethnic music, sound effects for radio and film, and even preservation of the spoken word.

Starr Gennett was hit severely by the Great Depression in 1930. It cut back on music recording until it was halted altogether in 1934.Gennett Studio is important for more than just the music it recorded. Its story tells us a great deal about the early development of the industry, the impact of the Great Depression, and the realities of race and prejudice in the 1920s. The story of Starr Piano Company and its Gennett record label is in so many ways a defining Hoosier and American story.

In You Are There: Gennett Studio, guests will explore this vital Hoosier story through artifacts, images, and interactives. Objects include original recordings like Hoagy Carmichael’s first version of Stardust and musical instruments used at the Gennett studio including a fiddle belonging to country artist Herbert Sweet. Several documents will be on display including a telegram from Gennett studio to Gene Autry. A dynamic digital interactive will give visitors the opportunity to sample the ground-breaking music made at the studio and influenced by artists who recorded at Gennett. Artists include people like Louis Armstrong, Alberta Hunter, and Charley Patton among many others.

Finally, visitors will be able to step back in time and explore a recreation of the original Gennett Studio. There you will be able to meet artists who recorded at Gennett studio, studio staff, and members of the Gennett family. You will be able to see how early recording was done, handle period instruments, play music on a period phonograph, and much more.