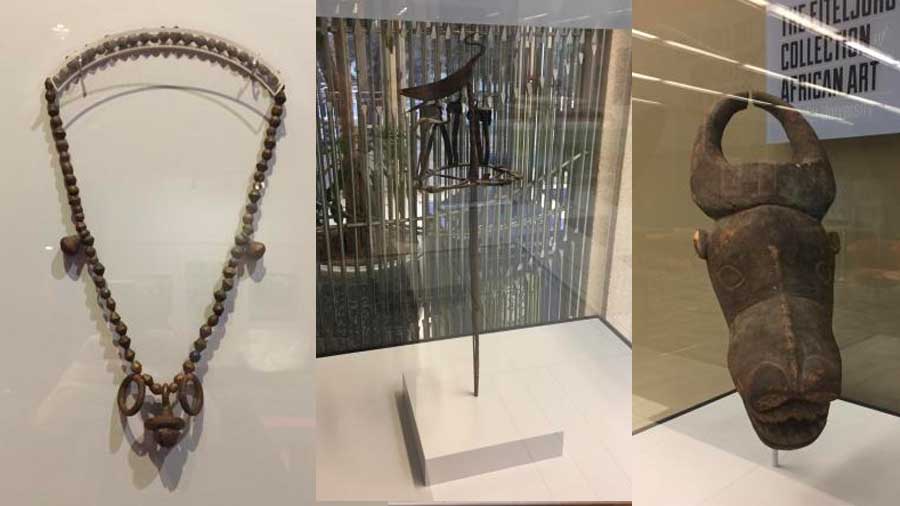 Butler has an Eiteljorg collection of African Art. Be sure to check out the exhibits located in Robertson Hall, the Efroymson Diversity Center, Irwin Library, Clowes Hall, Schrott Center, and outside the Reilly Room.

Born and raised in Indianapolis, Harrison Eiteljorg (1903–1997), renowned as a business leader and philanthropist, was also a passionate art collector. In addition to his beloved art collection of the American West, currently housed in his namesake institution, the Eiteljorg Museum of American Indians and Western Art, he was also an avid collector of African and oceanic art. While the Indianapolis Museum of Art displays the majority of his African art holdings, Butler University is proud to own and display several objects from Eiteljorg’s African collection.

Eiteljorg gifted or loaned a combination of African, oceanic, and Native American art to Butler University in 1977 and 1978. This varied set of objects was put on display during the fall semester in 1978 in a three-room exhibition space in the Atherton Union for its primary purpose as a teaching collection to accompany academic offerings in Art History. Theodore Celenko Jr., Eiteljorg’s personal curator and buyer at the time, curated this exhibition.

In 1988, Eiteljorg requested that all of the art loaned to the University be returned to him so that he could consolidate the pieces into the collections of the Eiteljorg Museum and the Indianapolis Museum of Art. He was adamant, however, that the University keep the objects that were originally gifted. A total of 32 African art objects remain in Butler University’s collection.

African art in the Eiteljorg Collection, created in the western countries of the continent, has both decorative and functional uses. The materials and media include wood, brass, iron, ivory, and clay. These objects represent many of the ceremonies and activities that define the historical, cultural, and traditional aspects of West African life.