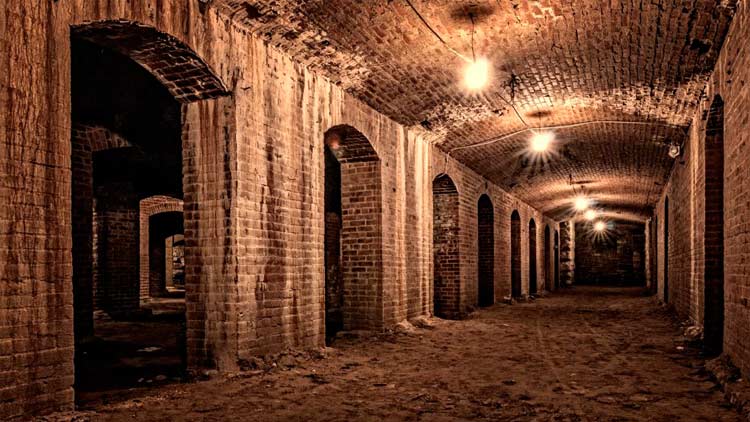 In partnership with Indianapolis City Market, Indiana Landmarks offers guided tours of an unusual site hidden from public view. These tours explore the Catacombs, a Roman-looking expanse of brick arches beneath the outdoor Whistler Plaza of City Market. Along the way, guides share stories of two historic buildings, City Market and Tomlinson Hall.

In 1886, the City of Indianapolis constructed two public buildings on Market Street designed by architect Dietrich Bohlen – City Market and Tomlinson Hall. City Market remains a thriving part of the downtown community. Tomlinson Hall, whose main hall seated 3,500 people, disappeared from the cityscape in 1958. Today only its iconic arch and its basement, known as the Catacombs, recall its once vibrant space.

The Catacombs qualify as both a ruin and a redevelopment opportunity. They’re what remains of Tomlinson Hall, which burned in January 1958, turning Market Street into an icy lake as firefighters battled the blaze. The city took down the remains later that year. Our Catacombs don’t contain bones or crypts—at least none that we know of—but rather scores of brick barrel-vaulted arches.

Tours are also offered on select Saturdays from May through October. Beginning in May 2022, tours will run every 15 minutes, beginning at 10 am, on the following dates: