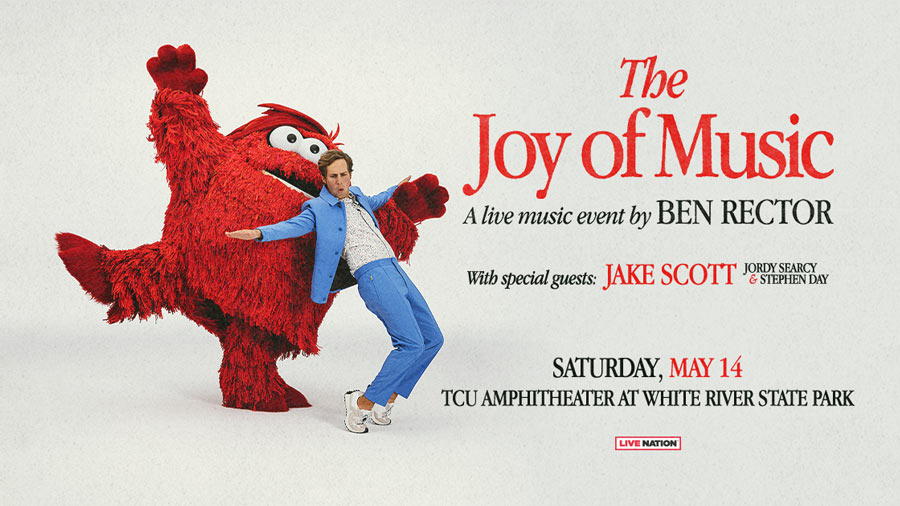 Indie hitmaker Ben Rector is ready to live his best life returning to the road with his upcoming tour THE JOY OF MUSIC: LIVE. The “millennial playlist staple” (HuffPost) will perform music off his upcoming album, The Joy Of Music, as well as fan favorites including “Brand New,” “Love Like This,” and more. Rector will be joined by special guests including Jake Scott, Jordy Searcy and Stephen Day.

"I think this album is my best work and I’m so excited to perform it live,” said Rector.

Rector rang in the new year by “giving fans a tease of his feel-good album” (E! Online) with an early release of the three tracks, “Dream On,” “Supernatural” featuring GRAMMY® Award-winner Dave Koz, and “Living My Best Life” to share a taste of what’s to come on his highly anticipated album, The Joy of Music, scheduled to be released on March 11, 2022. The album will include additional collaborations with award-winning rapper Snoop Dogg, iconic jazz musician Kenny G, Taylor Goldsmith from folk-rock band Dawes, as well as the YouTube sensation One Voice Children’s Choir.

Growing up in Tulsa, Oklahoma, Rector never expected to find himself immersed in the music scene. Though he spent his childhood learning piano and eventually picking up guitar in his teen years as he made the transition to singing and songwriting, Rector was not truly serious about his music until he studied at the University of Arkansas. It was there that Rector released his first self-titled EP, launching his music career as he began playing live shows. By the time he graduated, Rector had released two full-length albums and was ready to make the move to Nashville in order to dive head-first into the music industry.

Now, Rector has made a name for himself as both an artist and songwriter. He’s released seven studio albums, including Brand New (2015) which peaked in the Top 10 on the Billboard 200 and Magic (2018) which debuted at No. 1 on the Billboard Americana/Folk Albums chart. Last year, he used his experience to be an all-star mentor on ABC hit show American Idol alongside Ryan Tedder, Jewel, Jason Aldean, Jimmie Allen, Joss Stone among many others. Rector’s music has been used in over 100 television and film placements, including The Ellen DeGeneres Show, and Pretty Little Liars, American Idol, among others, and his sold-out amphitheater shows have landed him television performances on Jimmy Kimmel Live, Conan, the TODAY Show, and Live! with Kelly and Ryan. When the pandemic hit, Rector took the time to pour into his music as much as possible and has since announced his upcoming album, The Joy Of Music, is scheduled for release on March 11, 2022.