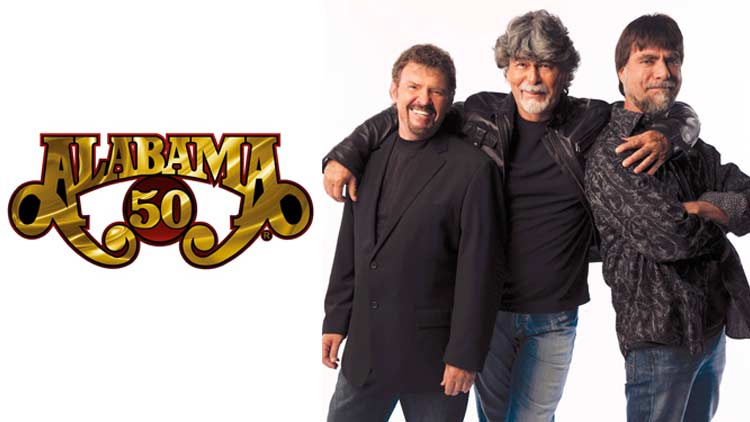 Tickets for the November 9 event will be honored.

It's been 50 years since Jeff Cook, Teddy Gentry and Randy Owen left the cotton farms of Fort Payne, Alabama to spend the summer playing music in a Myrtle Beach, South Carolina bar called The Bowery. It's a classic American tale of rags to riches. From humble beginnings picking cotton in the fields to international stars, ALABAMA went on to sell 80 million albums and change the face and sound of country music. Quality songs that have become the soundtrack for American life are the foundation for ALABAMA's stellar career. The group introduced rock style guitars, lights, pyrotechnics and sounds to the country audience that has inspired many of today's brightest country stars including Kenny Chesney, Jason Aldean and Luke Bryan. While their music continues to stand the test of time, their numbers and stats are beyond compare. Five decades since starting the band, ALABAMA has charted 43 #1 singles, including 21 #1 singles in a row, and have won dozens of CMA, GRAMMY®, and ACM Awards. They are members of the Country Music Hall of Fame, the Musicians Hall of Fame and have their own star on the Hollywood Walk of Fame. In addition, they are world-class philanthropists who have raised millions of dollars for various charities.

Multiple Grammy® nominee Martina McBride has sold over 18 million albums to date, which includes 20 Top 10 singles and six #1 hits. Martina McBride has earned more than 15 major music awards, including four wins for Female Vocalist of the Year from the Country Music Association and won three Academy of Country Music for Top Female Vocalist. Martina has been awarded 14 Gold Records. Nine Platinum honors, three Double Platinum Records, and two Triple Platinum Awards. Martina was awarded the Covenant House Beacon of Hope Award and Music Business Association’s prestigious 2015 Harry Chapin Memorial Humanitarian Award for her philanthropic efforts on behalf of domestic violence. Martina has released two books – the first, Around the Table, a full-color illustrated collection of her favorite recipes, hosting tips, practical menu planning advice, and themed décor inspiration. She released her second book, Martina’s Kitchen Mix: My Recipe Playlist for Real Life, in October 2018. Most recently, Martina was honored with the Cliffie Stone Icon Award at the ACM Honors event for her impactful contributions to country music. McBride’s newest single, “Girls Like Me” was released in May of this year.