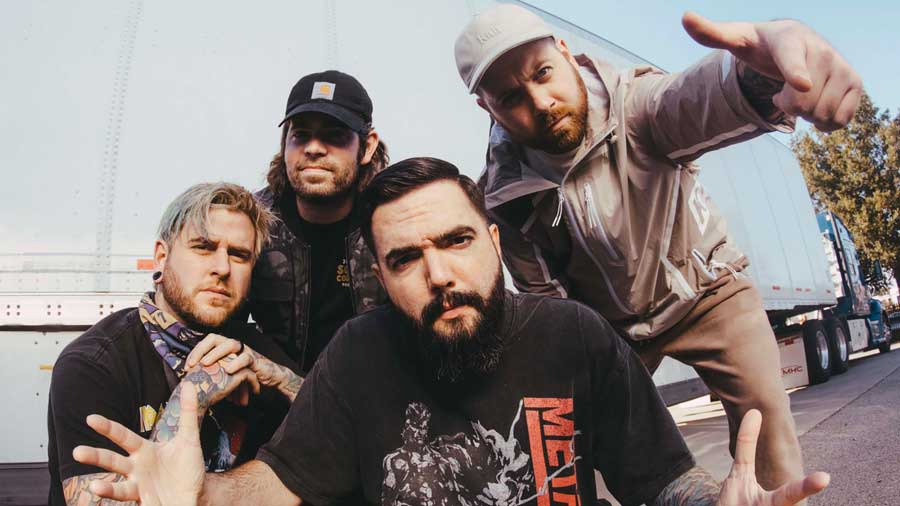 Earlier this year A Day To Remember shared a new version of their single “Re-Entry” featuring Mark Hoppus of Blink-182.

“Re-Entry” originally appeared on A Day To Remember’s latest studio album You’re Welcome. Available on all streaming platforms, You’re Welcome is largely produced by Colin “DOC” Brittain and the band’s own Jeremy McKinnon. The 14-track collection represents another major step forward for the acclaimed quintet, and is highlighted by singles “Brick Wall,” “Degenerates,” “Resentment,” “Mindreader” and the #1 Active Rock hit single “Everything We Need.”

Having amassed over 1.6 billion global streams to date, A Day To Remember incited critical praise with You’re Welcome. Revolver declared, “[Brick Wall] showcases the group's signature mix of post-hardcore heaviness and pop-rock hooks,” while Consequence of Sound declared, “the Florida rockers’ new LP will continue their wide-ranging sound that ranges from infectious pop-punk to crushing metalcore.” Forbes put it simply, “It seems A Day To Remember are only just getting started,” and Billboard praised the band’s “anthemic hybrid of post-hardcore and pop.” Popdust avowed A Day To Remember “have all but mastered their niche melding of pop melodies with hardcore music,” while Kerrang! attested, “‘You’re Welcome’ is the perfect soundtrack to this strange and uncertain world that we live in.”

Last year, A Day To Remember also unveiled their first-ever acoustic livestream event, “A Day To Remember: Live at The Audio Compound.” After premiering the stream on their official YouTube channel, the band surprised audiences everywhere by releasing the career-spanning nine-song performance as an acoustic live album, Live At The Audio Compound, which is available now on all DSPs.

Since their formation in 2003, A Day To Remember quietly emerged as arguably the biggest underground band in the world. The Florida group affirmed this status by achieving one platinum album, one gold album, one platinum single, and four gold singles. Not to mention, each full-length record ascended to #1 on the Billboard Rock, Indie, and/or Alternative Charts with 2016’s Bad Vibrations bowing at #2 on the Billboard Top 200. They’ve put up unprecedented numbers for a rock act in the 21st century, generating 850 million Spotify streams, 500 million YouTube views, and sales of three million-plus units. They’ve also packed arenas on continental tours and attracted a worldwide audience consisting of millions. Additionally, A Day To Remember successfully launched their own Self Help Festival in 2014, which continues going strong. Plus, everyone from Marshmello to Pierce The Veil has sought them out for collaborations. All of which explains why Rolling Stone called them “An Artist You Need To Know.”